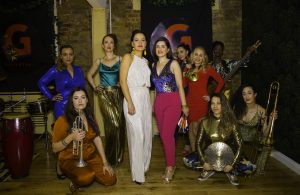 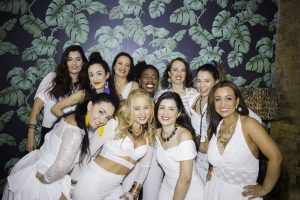 Invoking their inner “Guerrera” and bringing together the best female musicians, London’s first all female  Latin Music band was born.

Guerrera is made up of 10 highly skilled, female musicians from around the world but residing in London. With a three piece brass section, an electrifying rhythm section and three strong lead vocals, Guerrera has an eclectic and contemporary musical style playing tribute to the classics as well as swinging to the current Latin American trends. They will take you on a journey across Latin America with a touch of  Cumbia, a dash of Salsa and a scoop of Reggaeton  amp up the groove. All of this brought together with Guerreras original trademark harmonies, and  arrangements by its musical director Lilli Elina.

With support from Jazz FM and many more, he is already making a huge impact in the world of Latin Jazz. Miguel’s heartfelt debut album “An Angel’s Healing” has just been released, featuring an impressive roster of accomplished musicians such as Keyon Harrold, Emanuel Harrold, (Gregory Porter) Jay Phelps, Yelfris Valdés, Jackson Mathod + more.

With influences from Latin America, Miguel displays dexterous ability and flair on guitar, emotive nuanced songwriting and a clear understanding of modern jazz, bound together with a range of influences from his Mediterranean upbringing.

Born to the sounds of Grupo Niche and Celia Cruz and raised to the likes of Chris Brown and Kali Uchis, Sachellys’ music is Colombia straight outta London. Her debut single Could You Be’ landed her a spot at local Pride Festival in 2019. And ‘Pa Mi’, her latest single, was selected as Trace Urban’s track of the week, and the video aired on sky 364 for a month as part of their top 10 chart show.